The plans to cut off the Menindee Lakes

Under the Murray-Darling Basin Plan, a certain volume of water must be 'recovered' for the environment to try to make water management in the basin sustainable. Taking water from the Menindee Lakes system is seen by authorities as an easy way to contribute a significant volume of water towards this target. Others believe taking water from an important environmental asset to provide water for the environment is deeply flawed. 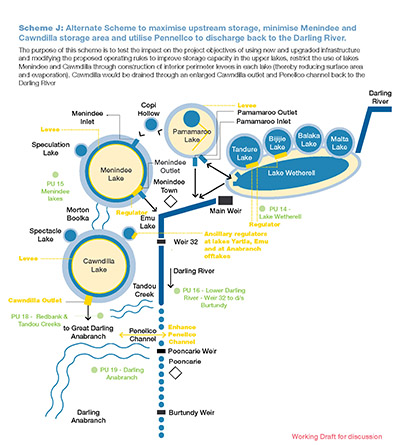 A range of different engineering modifications and water management regimes have been proposed. The purpose of these schemes is to reduce the amount of water flowing into the Menindnee Lakes by up to 80% and to drain the Menindee Lakes when they do fill more quickly and thoroughly.

Cawndilla is the deepest and second largest lake in the Menindee Lakes system. If this proposal goes ahead, Lake Cawndilla would receive water far less often, degrading its environment, depleting groundwater sources, and impacting golden perch and other aquatic and bird species. Downstream of Lake Cawndilla is the Great Darling Anabranch, a system of creeks, billabongs, lakes and rivers that will also be denied regular water.

Less water would flow through the Morton Boolka area. This area has important environmental values and there are many important and sacred sites for Barkindji people.

These plans turn the Menindee Lakes into mere moats.  A levee would be raised parallel to the shoreline, leaving the vast interior of the lake dry, except in large floods.  This would dramatically reduce the volume of water in the lakes. Levees are proposed for the three largest lakes - Lake Menindee, Lake Cawndilla and Lake Pamamaroo.

3) Enlarging drainage channels and outlets. This would allow the lakes to be emptied more rapidly and to be able to drain more of the water in the lakes. Water that can not been drained from the lakes is termed ‘dead water’, although nature might disagree. In order to minimise the amount of ‘dead water’ left in the lakes, they propose to build and enlarge the drainage channels and the regulators that control water entering and draining from the lakes.

4) Deepen and dam the smaller Upper Lakes - At the top of the Menindee Lakes system is a series of smaller lakes - Lakes Tandure, Malta, Balaka and Bijijie. It is proposed to deepen these lakes and install regulators on them in order to store water in those smaller lakes rather than the larger lower lakes.  This will not only alter the ecosystems of those smaller, upper lakes, but will mean less water for the important larger lower lakes.

5) Enlarge existing channels between the lakes and river. In order to facilitate the transfer of water between the lakes and the river, it is proposed to 'enhance' Penellco Channel to allow water from Lake Cawndilla to be pumped back to the Darling-Baaka River rather than run down the Great Darling Anabranch.

The local community and Barkindji people have rejected these proposals. They are concerned about the destruction of the Menindee Lakes and also on what it means for flows in the Darling-Baaka River. These groups have walked out on 'consultations' until the NSW Government can guarantee that flows will be restored to the Darling-Baaka River and that the Menindee Lakes and Barkindji cultural sites will be protected.

For more details about these plans, watch the video below.